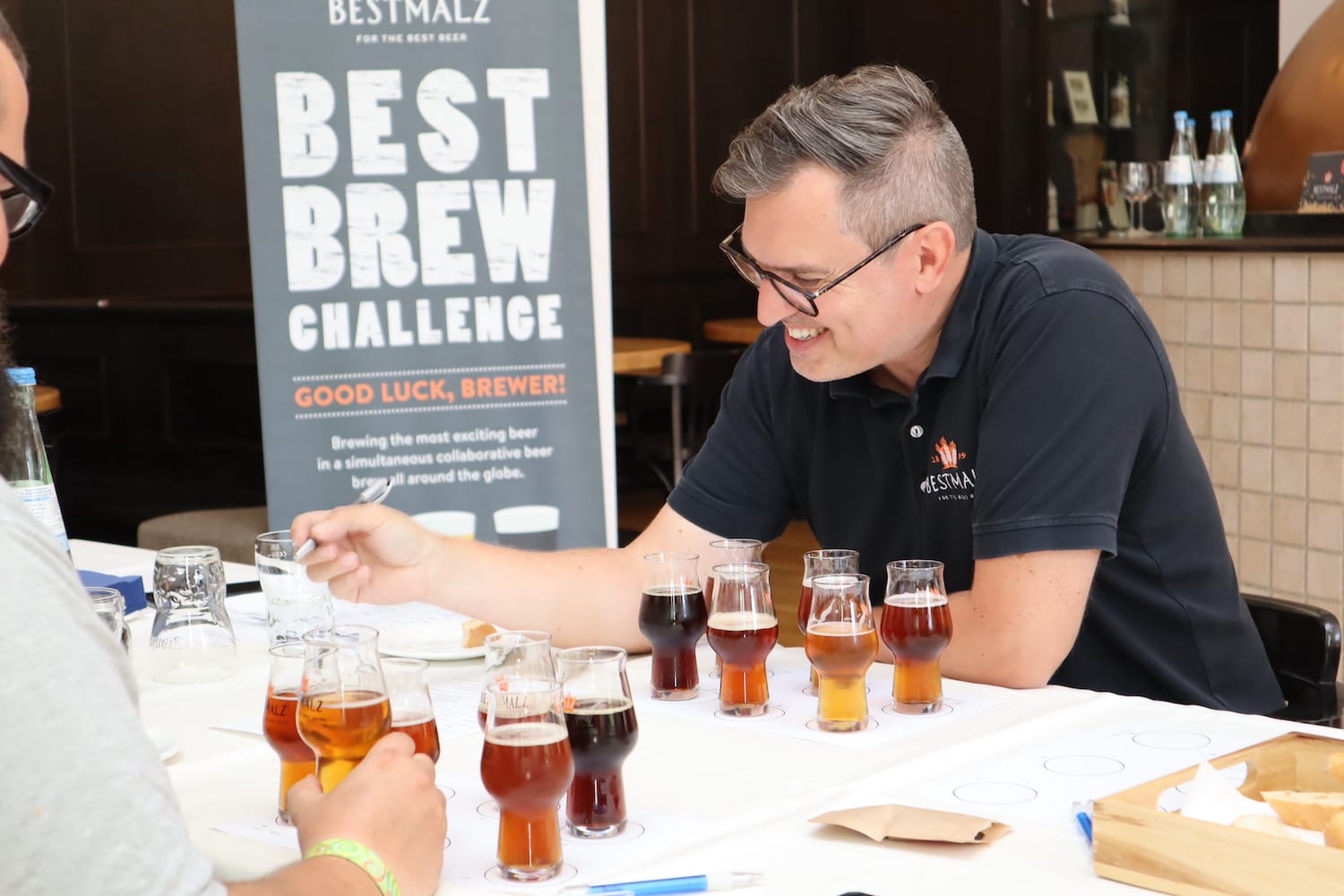 “Now I’m excited.” The first tray of dark beers in bulbous tasting glasses stands in front of beer sommelière Marlene Speck. She lifts one of the glasses and holds it up to the light to assess color and cloudiness. Before taking a small sip, she swirls the beer in the glass and inhales deeply through her nose. “Fresh, clean, aromatic.” She sips and her gaze wanders briefly into the distance. “The roast note is there, and the bitterness is well balanced.”

Together with five other beer experts, Marlene Speck tasted her way through 155 international Altbier entries for the BestBrewChallenge 2022. The blind tasting took place on Monday, July 4, 2022, at the Beer Museum of the nh Hotel Heidelberg. The jury comprised Fabian Staudinger, Patrick Schäfer, Mareike Hasenbeck, Marlene Speck and Richi Leder. Meinhard Wicht had to cancel on short notice, so graduate brewmaster René Auradniczek from the Bestmalz team stepped in to ensure that the tasting rounds could proceed according to plan.

Not all Altbier creations fared as well as Marlene Speck’s first tasting beer. Beer faults were also noted: “It tastes like it came straight from a rusty water pipe!” exclaims one of the tasters, shaking his head. The beer experts excluded some beers from further tasting upon detecting vegetable-like or buttery off-tastes, among others. The jury members tasted their way through all the beers in several rounds until the crème de la crème was determined by the afternoon.

“It’s exciting to see how Altbier is interpreted internationally,” says beer sommelier Patrick Schäfer after the tasting. He thinks it’s good that prizes are also being awarded this year for packaging and label design. “That’s where you see and appreciate how much thought and how much work the brewers have put in beyond just brewing beer.” For a selection of the creative works and additions such as stickers, bottle openers and coasters made of cardboard, cork or wood were presented to the sommeliers. To ensure that the “Blind Tasting” remained “blind”, this display was set up without any reference to the actual beers.

Who brewed the winning beers of this year’s BestBrewChallenge 2022? “This BEST-kept secret is still under wraps,” says BESTMALZ CEO Dr. Axel Göhler. It will be revealed at the official award ceremony on Tuesday, September 13, 2022, at drinktec, the world’s largest industry trade fair, in Munich (BESTMALZ booth A5/460). The Creative Award winners will also be announced there. “One thing we can already say today, however, is that the BestBrewChallenge 2022 was highly successful setting a few new records,” adds Göhler contentedly.